When summer comes really tough and the heat burns on a weekday, all we want to do are get home, take a shower and just cool off on the couch with the fan set at full speed.

Sometimes, however, we have to deal with pollutants that make breathing difficult. This is why some fans feature an ionizer feature to release negative ions into the air and get rid of particles like dust, mite etc., and generally freshen up your room.

But there have often been questions around the effectiveness of fan ionizers and the opinions are mixed. While some believe ionizers are pretty much what you need to achieve clean indoor air, others tend to see such claims as flimsy.

If you have such questions, you’re definitely in the right place, and we’ll answer all those questions that have bothered you for a while. Let’s get right to it then.

What Does Ion Mean on A Fan?

Literally, an ion on a fan means the fan has the capacity to release negative ions into the air for purification purposes. What a negative ion does is to attach itself to airborne particles, charging them electrically until they become too heavy to float.

These particles then collect on your floor and surfaces which can be cleaned up. With airborne particles, it becomes difficult to breathe properly in your home because the air is contaminated. This can cause severe irritation, aggravate asthma or cause some other respiratory illnesses.

Some studies have shown that negative ions are not only effective at removing particles, mold and some microorganisms from the air, but they also serve as effective mood boosters and vibe builders.

With this feature, your fan begins to perform two functions; cooling the air and cleaning it too. What this also means is, you may not need to spend extra finance on an air purifier, unless indoor air pollution is at uncontrollable levels and your ionizing fan can’t do it alone.

It all comes down to the product’s quality, really. If you buy a good product, you’ll get some results, but a bad product will be really disappointing. There are mixed responses regarding fan ionizers.

The skepticism often drives people to debate whether buying a fan ionizer is a worthy investment or a complete waste of their resources. Even the science to support this is not one-sided.

There are still some experts who believe these fans offer no benefits. However, we have seen some users attest to the fact that fan ionizers work.

This is why getting a strong ionizer is the smart move to make. There are quite a number of products out there, but be sure to pick the one with very positive ratings, great user feedback and desirable features.

Lasko is one good brand and their 42″ Oscillating fan with Air Ionizer is a good choice. 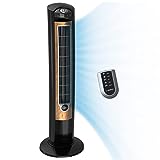 But don’t take our word for it; do your own research and make sure the product you choose offers user satisfaction based on verified user feedback. This is how you’ll get a product with the ability to remove the maximum amount of pollen, dust and dander.

Are Fans with Ionizers Safe?

Safety is a major concern when people hear the word ionizer. People are often worried about how safe it is to inhale negative ions, and the thousands of misleading information on the Web doesn’t help matters at all.

Truth is, ionizing fans in themselves are completely safe because negative ions are safe and even considered useful for removing allergies and boosting your mood.

In fact, it is important to note that negative ions are everywhere around us. They are the result of interactions between the air and energy sources.

Ozone, when released in excess and inhaled, can lead to severe symptoms like chest pain, shortness of breath, coughing, soreness in the throat, and several other respiratory infections.

Just be sure to choose a fan ionizer that doesn’t support ozone generation. However, if you already own an ozone-generating fan, be sure to always set it on low to keep ozone at harmless levels.

If you own an ozone-generating fan without a means of controlling amounts of ozone released, you’d be better off without it. An ozone generator without control is very risky and is dangerous to use.

Pros and Cons of Fan Ionizers

Fan Ionizers have been found to be truly effective at removing small particles in the air. This includes particles that even particulate filters tend to miss. This is, perhaps, why they are a popular appliance in many homes.

Here are some of the many benefits of using fan ionizers;

On the flip side, there are some disadvantages of using a fan ionizer. They include;

So, do fan ionizers really work? The answer is Yes. As long as you purchase a non ozone-generating ionizer or one whose ozone output can be controlled, you shouldn’t have any problems at all.

Having a fan ionizer or ionizing fan offers you the luxury of two broad benefits, including making your air cool and comfortable for living and the air Pure and healthy for breathing.